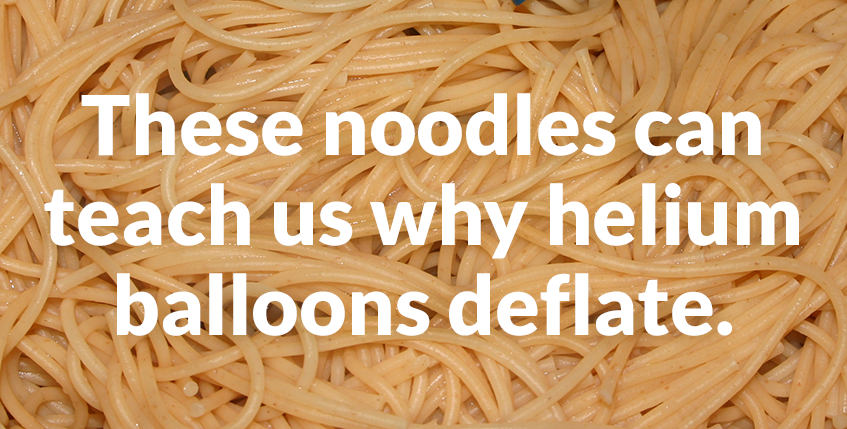 Why do helium balloons deflate so fast?

There are actually a couple of different factors that come into play here. Let’s start with the latex balloon.

If you magnified the latex from a balloon enough times to see its structure, you’d see something that resembles a pile of noodles. And like a pile of noodles, in between those teeny tiny strands you’d notice thousands of small gaps. That’s right—your latex balloon is full of holes! (And when you inflate the balloon and stretch the latex, you open the holes even wider.)

Now, the holes are extremely tiny. Remember, you’re looking through a microscope. But over time, the air or helium inside of the balloon will make its way out of the porous walls and you’ll be left with your deflated balloon. This is called “permeation.”

You may have noticed however, that your latex helium balloons will be long gone while your air-filled latex balloons are still inflated.

Has your helium escaped? Get a free quote from Zephyr here.

Why do helium balloons deflate faster than air-filled balloons?

It’s all about size, really. And we’re not talking about the balloon.

Helium is the second smallest molecule on the periodic table. Individual oxygen and nitrogen (the air in your air-filled balloon) molecules are roughly four times larger than helium molecules.

But oxygen and nitrogen molecules don’t have the same freedoms that helium molecules have.

In gas form, each individual helium molecule moves around on its own. Oxygen and nitrogen molecules are diatomic, meaning they’re bonded together in pairs.

That means that these conjoined molecules are now almost 8 times larger than a single helium molecule.

So, back to the permeation we discussed earlier.

Imagine a small child walked through a door. Next, two adults linked arms and went through that same door side-by-side. The two adults would have a more difficult time getting through the door than the small child did. This is what happens with the different molecules.

The small, individual helium molecules can escape through the tiny holes in the latex far more easily than the conjoined oxygen or nitrogen molecules can. Eventually they’ll all get out, but the helium has a much easier time escaping.

This is why your helium balloons deflate faster than the ones you fill with air.

Why do latex helium balloons deflate before foil balloons?

You’ve probably noticed that your helium-filled foil balloon lasts a really long time compared to a helium-filled latex balloon. And learning what we’ve learned so far, you probably assume it’s because of the material of the balloon itself.

And you’d be right.

Unlike latex, the foil material is non-porous and it also expands without stretching. Helium molecules can and will escape eventually, but usually this occurs through either the stem of the balloon or any microscopic inconsistencies in the seams, not the material itself.

Think of it like a concert venue, with thousands of people inside the arena serving as the helium molecules and the gaps in the foil balloon being the doors of the building. If there are only one or two doors, it’s going to take a heck of a while to get everyone out.

This is why your foil helium balloon is still floating weeks after you brought it home.

Has your helium escaped? Get a free quote from Zephyr here.

Why does helium escape at all?

Good question. Helium gas is notoriously “leaky.” The molecules are so small they can get out through the tiniest of openings and because they’re “lighter than air,” they constantly want to get out and travel up toward the sky.

This is why helium is used to detect leaks in things like the hulls of boats. If the helium can’t escape the seams of the boat, the water can’t get in.

So there you have it!

Not ready to go back to work?

Check out our article with videos on how latex balloons are made and how latex is tapped from the rubber tree.

8-year-old girl dies after inhaling helium from a balloon