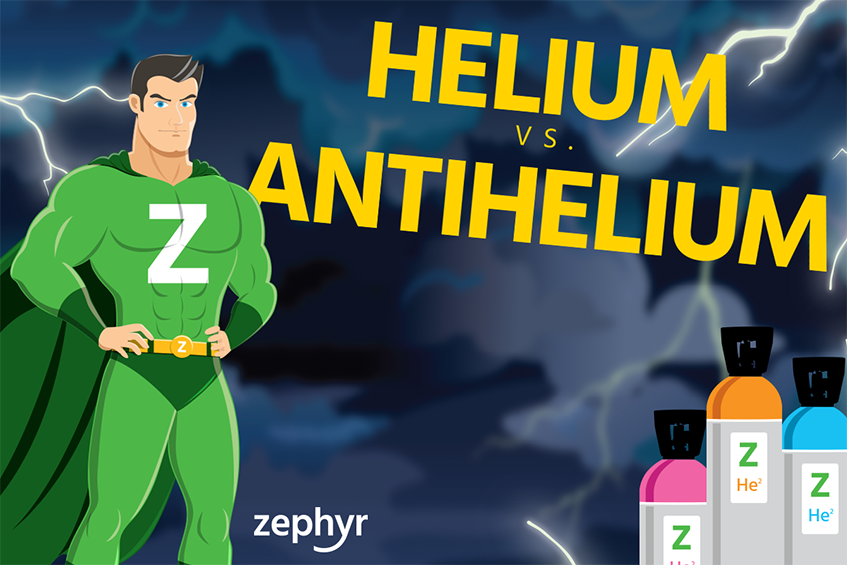 Discovery of antihelium – a story still being written

It sounds like a villain of a nerdy superhero of the elements, but antihelium is a very real and very weird thing. And we keep finding it.

We (at Zephyr) are not scientists and therefore do not know a bunch about antimatter, other than science is working really, really hard to discover it. But we’ve done lots of research so that you don’t have to!

By definition, antimatter are particles of matter that are the opposite of everything normal that we know in our universe.

Until somewhat recently, while humans theorized antimatter was created in equal parts to regular matter during the Big Bang, we weren’t sure if antimatter even existed in our universe. It’s nearly impossible to find.

What’s incredible is the behavior of antimatter particles. When they meet each other, they destroy each other, leaving behind nothing but a ball of incredible energy.

It should have existed, but we only knew that in theory up until 2011 when the researchers at the STAR experiment at the Relativistic Heavy Ion Collider at the Brookhaven National Laboratory managed to create 18 examples of antihelium by smashing gold particles together.

It was a major discovery, cited as the discovery of the heaviest antimatter particle ever found, a title it still holds. Each particle of antihelium is about 10 MILLION BILLION times lighter than a single grain of sand. Think about THAT.

(Fun fact: According to Live Science, it takes $100 BILLION to create 1 milligram of antimatter in the lab. Ironically, the universe makes it for free.)

An antihelium particle is stable. Very stable, actually. Aihong Tang, a physicist at Brookhaven has been quoted to say that if an antihelium particle never encounters anything, it will live on forever. We are happy to carry antihelium’s arch enemy: Regular helium! Zephyr can give you a free helium quote any time!

Just last week, an article was released announcing Sam Ting’s potential discovery of antihelium just outside of our planet.

Ting was behind the building and launch of a giant, $1.5 billion space magnet that was affixed to the International Space Station in 2011. The goal of the magnet was to trap antimatter moving through space.

And it seems it has just trapped antihelium, which would support the idea that there are still pockets of the ever elusive antimatter lingering in our own universe.

What can we do with antihelium?

The future of antihelium is happening right now, so from what we can research it seems too early yet to understand the potential uses of antihelium specifically.

However, for years now, scientists have been studying the potential of using antimatter as fuel for space travel. It sounds like science-fiction, which it was on Star Trek, but it may soon become reality.

A tiny handful of antimatter could produce a huge amount of energy, allowing us to travel through space at incredible distances and speeds without requiring traditional fuel.

The current problem is solving how to collect and store enough antimatter to make the theory reality.

Can we make helium?

Is a battle forming over Tanzania’s recently discovered helium reserve?