HomeHeliumYour smartphone is made with helium 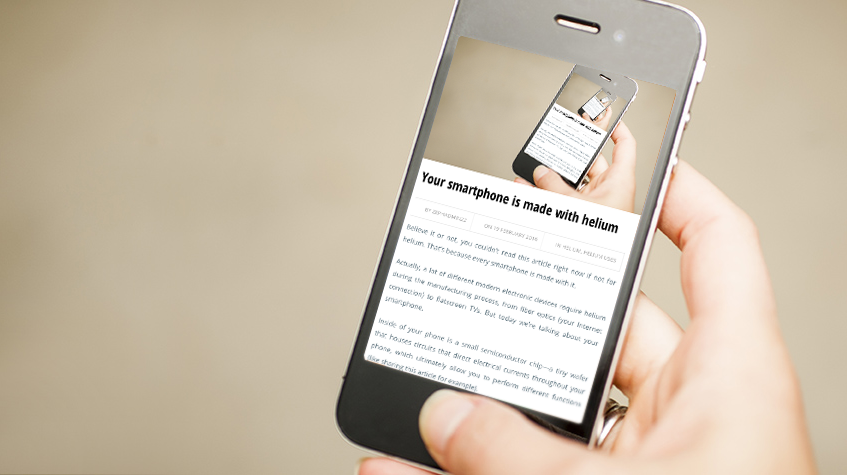 Your smartphone is made with helium

Believe it or not, you couldn’t read this article right now if not for helium. That’s because every smartphone is made with it.

Actually, a lot of different modern electronic devices require helium during the manufacturing process, from fiber optics (your Internet connection) to flatscreen TVs. But today we’re talking about your smartphone.

Inside of your phone is a small semiconductor chip—a tiny wafer that houses circuits that direct electrical currents throughout your phone, which ultimately allow you to perform different functions (like sharing this article for example).

Throughout the 1,500+ step process (which starts with sand) in making a semiconductor chip, helium is needed for several critical functions.

Helium is also needed in retail stores. If yours is one, get a free quote from us.

A clean, controlled atmosphere is needed to produce the chips. Just a single grain of dust can ruin a chip’s functionality, and so because it is non-reactive, helium is used to flush out and purify the assembly environments.

Helium is needed as a carrier gas during the deposition process, which is when a insulation layer is grown on the silicon surface within an inert atmosphere. It’s also used as a dilutant gas during plasma etching of the wafer, in which the circuit design is etched into the silicon.

Helium is also essential as a coolant to prevent overheating during manufacturing and because of it’s legendary ability to permeate the tiniest of pores and seams in materials, it’s also used for leak detection in compartments that need to be completely sealed.

Therefore, no helium means no smartphones!

If you want to actually watch the process of making a semiconductor chip, check out this video. It’s quite incredible!

Why is it so loud when a balloon pops?